YOUR Boise Hawks teamed up with Pacific Source once again to promote healthy choices and being active for the second year in a row. The 2013 Boise Hawks Baseball Camp took place over two days, June 27- 28 and brought out even more kids than last year. There were 110 participants and a team of 16 Boise Hawks along with Manager Gary Van Tol helping out.

Matt Iannazzo, pitcher for YOUR Boise Hawks, was the camp captain during warm-ups. “I loved seeing the kids have fun and enjoying the game that we take so serious day in and day out.”

The kids had the opportunity to work on stretching, hitting, pitching, catching, etc. There were 10 teams that rotated between different stations throughout the two days. From what I heard, the Radar machine was the favorite amongst the young athletes.

I had the chance to catch up with four of the youngsters while they were enjoying their team lunch at the conclusion of day one. Three out of the four claimed the radar was the best station while one little guy loved the catching station and praised his coach, Lance Rymel, catcher for YOUR Boise Hawks. Nicholas McDaniel, son of our team photographer, Scott McDaniel, and his friends, Ryan Baker, Peter Palavos, and Nathan Palavos are all teammates on the Yankees for the Meridian PAL.

The camp goers also got the chance for a little fun on the slip-N-slide, lunch with the players, and an autograph session on day two.

Check YOUR Boise Hawks social media sites for pictures from camp and for information on how you can sign up to participate next year. 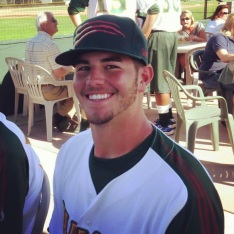 Since the day Corbin Hoffner can remember he has wanted to play baseball professionally. His father, Bob, coached his older brother Kyle which is what sparked his interest in baseball at a young age. Coming from a small town has been Hoffner’s biggest struggle with the chance to show scouts what he was made of being slim to none. Going to St. Petersburg College in Clearwater, Florida gave him the exposure he needed to get the opportunity he has today in the Cubs organization.

While a college education was important to Hoffner, he couldn’t resist the opportunity to sign with the Cubs when they also offered him money to finish his college education later in life. Playing baseball as his job with the chance to continue with college later was just what he was looking for. “Having that opportunity was something that I could not pass up.”

As far as Boise goes, Hoffner is just about two weeks into his stay and says it has been great thus far. “I didn’t know what to expect but so far it has been really good.” Hoffner has made 2 appearances for YOUR Boise Hawks, one of which was here in Boise where he went 3 IP, 0 R, 0 H, 1 BB and 4K.

Getting to this point has been a lifelong dream of Hoffner’s. “It has been a dream to play pro ball since I was a little kid playing tee ball, I have always wanted to play professionally.” Hoffner says his family has been the best support system throughout the years. “They are always there for me through thick and thin with whatever the situation has been.” Hoffner has 2 siblings, an older brother Kyle, a younger sister Carly, and his parents, Bob and Tammy. He is not sure if they will make it out to Boise but he knows they are trying to.

Hoffner is from Sebring, Florida, a little town in the middle of the state. He enjoys golfing, hunting, and playing ping pong with his buddies. His best advice to pass on is “Put everything you have into the game you love and have no regrets when you look back on it one day.”

A common denominator when it comes to YOUR Boise Hawks is the fact that their father’s were the one’s to get them started in baseball. From playing tee ball to acting as the bat boy for a major league team, these boys started out with their father’s by their side. For Shawon Dunston Jr., baseball and life are one in the same between him and his father.

While it is hard to remember where it all began, Shawon Jr. says that his most vivid memory is acting as the Giants Bat Boy for the last two seasons his father, Shawon Dunston Sr., played. “Just being there with him everyday and seeing guys like Barry Bonds do what he did was pretty special.”

In the Dunston household, baseball is life. “My dad has related life and baseball together since the day I can remember.” When it comes to Shawon Jr., Shawon Sr. tries to help out mentally whenever he can. Shawon Jr. says the best advice his father has given him is “You’re in a lose lose situation. If you go 0 for 4 then you’re not good, but if you go 4 for 4, it’s because your father played. Just play hard, you are somebody and everyone is watching, so remember everything you do, people are watching close.”

Shawon Jr. started out with YOUR Boise Hawks last season but was sent back down to Mesa. Throughout the off season Twitter and Instagram posts told the story of his fight to get mentally prepared and come back strong for 2013. “While my father helped me mentally, physically I took it upon myself to work harder, put on weight, and to be prepared and ready once spring came.” While the season is just two games in, Shawon Jr. is batting .500 and proving himself on the field already.

While Shawon Jr. will not be able to see his Dad for Father’s Day as he is coaching the Giants against the Braves in Atlanta, his older sisters Whitnie and Jasmine drove down to meet him, “he’s pretty excited about that.”

Shawon Jr. says that his father has always told him he did not have to play baseball, but, “if you want to do what I did for a living, there’s going to be sacrifices you have to make.” Missing out on special days such as Father’s Day is definitely one of those sacrifices. One of his father’s favorite sayings is “you’ll have me now, but love me later.” I think that says it all.